The following article appeared in the Boston Globe on December 23, 2008.

"She smiled right until the end" 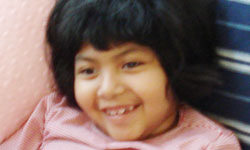 As if she knew her time alive

Would be too brief, Marisol Liliana O'Brien seemed to keep her eyes open day and night.

"From the very first night, she would not sleep," said her father, Thomas O'Brien of Lexington, who first held Marisol eight years ago in a hotel in Guatemala, when his adoptive daughter was 7 months old. "She didn't want to close her eyes and miss anything, I think. There I was alone in this hotel room with her - I didn't even have a crib. So I put her on the bed next to me. We had a great time, and for the next three days we walked through the streets. Guatemala City is filled with wonderful people, filled with good will."

So, too, was Marisol, despite spending most of her life afflicted by a form of leukodystrophy, a degenerative disorder that affects the tissue that controls how signals are sent throughout the brain.

Nevertheless, her smile turned strangers into friends, even as her illness brought family members closer to their faith and tightened the bonds of a community.

Marisol was 8 when she died Saturday in her Lexington home, her family gathered around.

"The last thing she did was that she smiled and mouthed the words, 'I love you' to us," her father said. "She smiled right until the end."

Her smile, joyful and inviting, breathed warmth into encounters often fraught with silence.

"She had an ability to reach out to people," her father said. "At the beginning of her disease, we were in and out of hospitals. We would be on an elevator, the door would open, and a serious doctor would step in. Marisol would look up and say, 'hey' or 'hi' until the person turned and looked. And she would ask, 'Where's your mama?' Then Marisol would point to my wife, Patricia, and say, 'This is my mama,' and she would completely disarm any doctor, any professional."

"I think she was very well loved by all of her providers," she said. "I only knew her from the time when she was not able to speak and not able to walk, but even then she drew people around her and was such an affectionate and warm-hearted little girl."

Before the doctors, tests, and painful decline in Marisol's health, the O'Brien family felt close to perfect, her father said, and she was the presence who completed the picture.

Thomas O'Brien, a former director of the Boston Redevelopment Authority, and his wife, the former Patricia Joyce, adopted all four of their children: first Lucas from Colombia; then Nina from Guatemala; and Tomas from Ecuador. A trip to adopt Marisol meant traveling familiar ground.

"We had eight or nine trips in total to build our family," Thomas O'Brien said. "God has been good to us. Our whole journey with all of our children has been a wonderful blessing."

With three young children at home, he went alone to Guatemala City to bring home Marisol, and "next thing I knew, the people from the adoption agency brought this little girl to me, and she was beautiful," he said. "A foster family had cared for her for her first seven months, and her foster mother had outfitted Marisol with two little earrings."

When he arrived at Logan International Airport with Marisol eight years ago this month, "the kids were so excited, each of them hugging her and holding her," he said.

"She loved to dance and sing," he said. "We had four children under the age of 5, and I have this vision of all four of them strapped in their child seats as we drove, and Marisol was in the middle. The music was on and Aretha Franklin was singing, 'I Say a Little Prayer for You,' and Marisol would say, 'louder, Daddy, louder.' And then she'd say, 'again.' "

The dancing began to slow before she turned 3, when she starting having trouble walking. Many doctor visits later, she was diagnosed with leukodystrophy, a disorder her father called cruel. Physical abilities disappear, replaced on some nights by seizures and muscle spasms.

"My wife, in six years, literally has not slept through the night one single time," he said. "My wife is an amazing person. I am so fortunate to have a wife who is so strong in her love for our family and her love for our faith."

"We could not bear this, we could not make it through this journey, if it were not for three things," he added. "One is our faith, the second is our family, and the last is a group of friends. They were unbelievable. If we had emergencies and an ambulance had to come at 3 a.m., we knew we had friends we could count on to come and watch our kids if we had to go to the hospital."

Marisol, he said, brought the O'Briens closer to their spiritual family at Sacred Heart Church in Lexington, where a funeral Mass will be said tomorrow at 10 a.m. Parishioners sometimes held 24-hour prayer services, staying up with the family.

"I think when you face this kind of a journey, you understand that there is a spiritual aspect of our lives that has to be central," he said. "For us, it's our faith. We're Catholics, so for us particularly now, when we prepare to celebrate the birth of Jesus on Christmas, this is a wonderful time for us to celebrate the life of a child who simply loved others."

O'Malley said her time at the hospital with Marisol brought to mind a poem by the late Raymond Carver, who wrote that he got what he wanted in life, "to feel myself beloved on the earth."

"That just sums up Marisol to me," she said. "I think I will remember her whenever I see that poem. She was really graced with love by her family and friends and providers, and we were all graced by her."

Along with her parents, two brothers, and sister, Marisol leaves her grandparents, Gerald Joyce of Milton, and John and Anne O'Brien of Harwich.

"Marisol was a beautiful child who had a simple approach to life," her father said. "She would look at everyone - medical professionals, her brothers, her sister, her parents - every day and say, 'I love you.' "